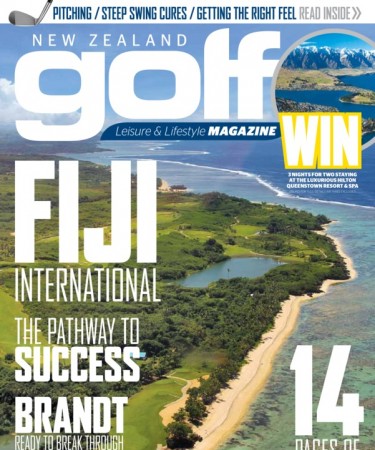 A new Australasian Tour tournament is about to hit the Pacific region and all the signs are that it is going to be a great event. What could be better than combining a holiday in a spectacular location and watching some great professional golfers playing their way around a spectacular course.

This is the first international golf tournament of its kind to be held in Fiji. With a US$1,000000 prize purse this is sure to attract a great field, especially as the aim of the PGA of Australia is to position this event so that it attracts players from around the world. The obvious choice was to lure Vijay Singh back to his home country for the first time in many years. Not only is he Fiji’s golfing poster boy he was also involved in the early stages with the design of the course.

The course at Natadola Bay is young. It was officially opened mid 2009, the day before it played host to the country’s Open Championship. That is a something to brag about, as not many courses around the world would get to host a major tournament immediately after opening. Matt Griffin won that tournament as a rookie professional; so he may well want to return to try to follow up his 2009 Fiji Open win with a win at the inaugural Fiji International.

Situated on the Coral Coast beside Natadola Bay, the course is spectacular. With views out to the coral reefs and the sparkling waters of the Pacific Ocean on 15 of the 18 holes there is plenty to distract the amateur golfer if your golf is not up to scratch.

The fourth hole runs alongside the sparkling crystal clear waters inside the reef and there is only a line of trees to indicate that you have moved from the white sand of the beach to the fairway bunker. I could have gone back and played that hole over and over again.

While the scenery and layout is spectacular the course itself is difficult. As we made our way to the course I was asked if I had plenty of golf balls as I was sure to loose a few. This made me, a high handicapper who hasn’t played much over the last couple of years because of an injury; approach the first tee with a fair amount of apprehension. We had been told that there were some locals selling golf balls beside one of the holes so even though I was sure I had plenty of balls I knew I could replenish my stocks if necessary.

The course is well maintained but with the incredibly hot weather (I drank 3 litres of water during the round) the green keeping staff are taking extra care of the greens to prevent burnt patches appearing on the greens as much as possible.

The tees boxes, fairways and greens are immaculately manicured with seashore paspalum. We are used to having different grasses used for the greens on many of our local courses but here this environmentally friendly solution works well.

The fairways vary in width and as the course is undulating and with some significant elevation changes you are constantly kept on your toes.

It is easy to develop a false sense that everything will be ok when you play your tee shot as the first lot of rough is quite short but if your shot is wayward and goes into the long rough (think scrub) forget it. Even on some occasions when we were sure of where the ball went in and were sure it was not far into the thick mass of greenery it was impossible to find that little round thing that was causing so much frustration. To keep the pressure on the player, many of the holes have a significant area of scrub between the tee and the fairway so if you don’t get the ball over that, another ball lost.

We soon found out that one of the local rules is the ‘Irish Drop Rule’. ‘Any ball lost in the long rough may be treated as a lateral hazard. One shot penalty and play from point of entry’. I daresay that came about after people found their rounds of golf were taking exceedingly long times to complete from playing numerous provisional shots or going back to the tee to replay a shot.

As we meandered our way around the course in our carts it became more and more obvious what a fantastic course this is. It is no wonder people see this as becoming one of the top courses in the South Pacific.

At the end of a great round of golf the cool and comfortable clubhouse beckons. It is the perfect place to sit and enjoy a post round refreshment as the Fijian style building sits on the highest point around giving fantastic views out over the course and the sea.

My bragging rights for the round were that I only lost 1 ball and that was into a stream, whereas one of the guys (with a much low handicap than me) from our group but playing ahead of us lost 9!

Alongside the golf course is the Intercontinental Golf Resort and Spa. Even though there are a myriad of resorts within reasonable commuting distance of the golf course this one is going to be hard to go past as a place to stay during the tournament.

Aside from its proximity to the golf course it is an idyllic spot to stay. Nestled amongst 35 acres of tropical gardens and sitting next to sparkling white sands of the beautiful beach that has been described as one of the best in the world.

All the things you want in a holiday resort are here. The rooms are extremely comfortable with terraces or balconies to relax on a day bed or in the private Cleopatra bath. There is plenty of variety for dining with five restaurants and bars from casual to fine dining. The weight I put on in the short time I was there is testament to how good it is.

If you want even more space, privacy and luxury stay at the Club Intercontinental. Sitting on a hilltop plateau overlooking the rest of the complex it is like staying at a completely different resort. With its own lounge and infinity pool and several other extra privileges this is an ideal place for quiet retreat and that little extra attention. The suites are luxurious and all have outdoor living areas. After an activity packed day it was so easy to cool off after slipping into my own plunge pool and then fall asleep on the outdoor day bed to get myself fresh for the evening ahead. A soak in the Cleopatra bath was the ideal way to relax before slipping into the comfortable king size bed.

One of my weaknesses at a resort is the Spa. Secluded by water features and frangipani gardens the Intercontinental’s Spa is a haven within the resort. With a variety of modern and traditional treatments to cater for everyone.

As I have always found on trips to Fiji the staff are extremely friendly. With their huge smiles and quiet manner there is always someone not far away to help ensure you enjoy yourself. Even the children are well looked after with Planet Trekkers, the resorts kid’s club.

The quality of this resort was recognised at the World Travel awards in Dubai at the end of 2013.

The InterContinental Fiji Golf Resort and Spa was named as Australasia’s Leading Golf Resort for 2013 in the awards program that celebrates excellence across all sectors of the global travel and tourism industry.

Fiji is a holiday destination where you can escape to a world without stress. Even though it is a small country, with over 300 hundred islands and over 50 resorts of varying styles and locations it is an ideal place to stay at more than one place.

Castaway Island is definitely stress free. A pristine, picture perfect island – with a resort. The bure (bungalow) accommodation is in the traditional Fijian style with thatched roofs and tapa cloth on the ceilings. It’s comfortable and roomy. As the couples, groups and families who have kept coming back year after year will attest, this place is magical.

The staff all live on the island so as well as the island being your holiday getaway it is their home, so you can be certain you will be well looked after.

There are activities galore or you can rest by the pool or on a sun lounger under the palms on the beach.

Our trip out to the island was for lunch, not exactly a destination you would expect for a lunch but it was well worth it.

Lance Seeto, the Executive Chef has been revolutionising the quality of food served on the island. Over the five years he has been there he has had an effect on food preparation throughout Fiji.

The signature restaurant on the island ‘1808’ provides a cultural dining experience inspired by Fiji’s history. The menu is a fusion of tastes and methods from the three cultures to have historically influenced Fiji; Pasifika, Chinese and Indian. Using and adapting many traditional cooking techniques Seeto has moved the dining experience away from the Fijian interpretation of western food that was so prevalent in the 80’s.

We watched as coconut milk was freshly prepared for our Peking Duck Kokoda in scorched coconut milk, gone is the tinned coconut milk with its preservatives. The next surprise was the delicious taste of the pork that had been infused for three days in a brine of natural sea water (not tap water with some processed salt added) and local spices.

Another treat was the steamed fish, freshly caught from the sea in front of the resort that morning, cooked in green bamboo and green coconut water. It made me want to come home and see if I could chop down some of our large bamboo to use for cooking, not quite sure where I could have a fire to cook in it though.

A meal here is a must for anyone who stays in this tiny piece of the paradise of Fiji.

If you can’t get to Fiji in August this year the tournament will be later in the year in 2015 as they have more time to fit it into the tour calendar.